You are here: Home / Coming of Age Fantasy / Chaos Awakens (Dragons of the Nether Book 1) by Megg Jensen 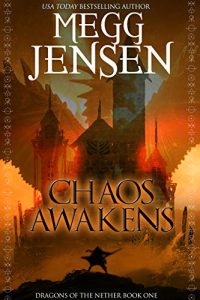 For hundreds of years, the orcs and humans of Doros have shared an uneasy peace. It shatters in an instant with the botched assassination of a human priest in the orc capital. Hell bent on revenge, the humans take up arms as the orc monarchy crumbles from outside interference.

Now Tace, the unlucky assassin, is on the run. It’s soon clear, however, that her mistake hasn’t only precipitated a war. It’s unleashed ancient powers, the stuff of legends and fireside tales—and not the cozy kind.

Tace has always worked solo, but to save Doros, she’ll need to assemble the unlikeliest allies. Together, they’ll unravel the mysteries of the orcs’ cult of death, and in the process, Tace will come to question everything she’s ever believed. Only one thing is certain: a great destiny awaits her—if she can live long enough to meet it.

Chaos Awakens is an epic fantasy spanning multiple continents. Orcs, humans, elves, fauns, dwarves, and dragons fight for dominance in a new fantasy world sure to spark the imagination of fans of George R. R. Martin’s Song of Fire and Ice series and Robert Jordan’s Wheel of Time series. Written by USA Today bestselling author Megg Jensen, Chaos Awakens is the first novel in the new series Dragons of the Nether.