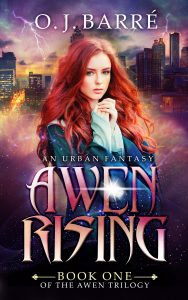 A secret society of Druids.
An ancient Reptilian foe.
Earth teeters in the balance.

Bankrupt and broken, Emily would give anything for a safe place to hide from the witch Shalane. But when her long-lost Druid family tracks Emily down and offers her haven, she balks at the “Must Save Earth” clause. As fate in the guise of crappy luck reveals her to her witchy stalker, Emily is forced to accept the Druids' proposition despite its blatantly outrageous terms.

At their headquarters in Atlanta, Emily learns several shocking secrets. She was kidnapped by the mother who raised her on the run. Her real father and his Druid followers believe Emily is Earth's only hope. And a dark, forgotten foe lurks beneath Humanity's feet.

As these Reptilians engineer a plan to breach Earth's unsuspecting borders, Emily desperately seeks to unleash the powers the Druids swear she possesses. Can a sexy druid priest, his teenage nephew, and their animal Elders tilt the odds in Emily's favor?

Author Bio:
O.J. Barré hails from the lushly forested, red-clay hills near Atlanta, Georgia. From birth, O.J. was a force of nature. Barefoot and freckled, headstrong and gifted; she was, and is, sensitive to a fault. Books became her refuge as a young child, allowing O.J. to escape the confines of her turbulent alcoholic home on adventures to untold places and times. Her daddy's mother was a Willoughby, making O.J. a direct descendant of William the Conqueror. Her Awen series is a love letter to that distant past.

Many of O.J.'s favorite novels are those with animal characters. In the early 2000s, Terry Brooks' Magic Kingdom for Sale/Sold leapt off the racks of her local Barnes & Noble and into her hands, changing O.J.'s life forever. With its quirky dog-scribe Abernathy and the other talking animal and earth characters, this series became one of O.J.'s favorites. Brooks' juxtaposition of a fantastical world within our day-to-day one directly influenced the creation of the Awen trilogy. O.J.'s love of meditation, natural healing, nature, and cinema can also be found in the pages of her novels.

A child of the '60s and '70s, O.J. cut her teeth on the classics, reading every book her local library had to offer, including Animal Farm at the tender age of eight. A tomboy, she rode horses, climbed trees, waded in creeks, and cheered, all while excelling in English classes and maintaining a straight-A average in school.

O.J.'s next writing adventure was a women's fiction novel, written when the title came in a flash of inspiration while driving through Dahlonega, Georgia. That title will be revamped as a paranormal women's fiction novel and published soon, along with a series of other novels starring the main character, Sammy Starr.

When ideas for the Awen Trilogy began bombarding O.J. and would not relent, she sidelined Sammy's project and dove into the fantastical Awen Universe. At present, this consists of Awen Rising, Awen Storm, and the soon-to-be-released Awen Tide. Plus, two short-read Awen prequels, The Druids of Marduk, Parts I and II. Part III will complete the prequel and is due out in early 2022.

Slave to a twenty-pound, black, longhaired he-cat named Rambo, O.J. currently resides near Boise, Idaho (U.S.). Her time is split between writing, working as a semi-retired chiropractor, vacationing at the Oregon coast and in the Idaho mountains, and occasional jaunts to Georgia and other parts of the globe.