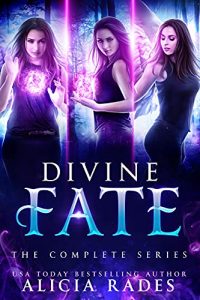 Ryn Tyler’s life changed the day she killed a demon.

Now she’s been thrown headfirst into a magical school for angels, with the power to become their savior in the war against demons. She trains in secret with her bad boy mentor, Marek, who’s hiding a troubled past.

Only Ryn has the ability to end the war and save the people she loves.

But Ryn’s fate doesn’t just concern her new home. If she fails, humanity will fall… and the very world will be at stake.

Thousands of copies sold! Join the battle of angels versus demons in this fast-paced, action-packed adventure for young adult paranormal and urban fantasy fans. Featuring a unique twist on angels, this page-turning teen supernatural adventure is packed with mystery, excitement, and romance.