You are here: Home / Featured Books / Gems of Fire by Diane E. Samson 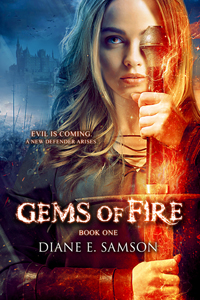 About Gems of Fire by Diane E. Samson

Fans of Throne of Glass, Shielded and Elise Kova’s epic young adult fantasy works will love the Gems of Fire series about a princess finding the courage to break the rules, save her kingdom and prove her worth.

A riding accident lands Princess Anna in the hands of traders who sell her as a slave in distant Kasdod to none other than her father's enemy, Lord Anwar. After overhearing a dangerous plot to conquer Sunderland and kill the royal family, Anna must escape and warn her father, even if it means facing her father’s brute royal counsel.

With hope of escape fading, Anna is approached by a dangerous man in the dark. He claims to want to help her, but can she trust him with her secrets? The perils of the journey ahead will push Anna to the limit and answer the one question that has always plagued her…

Will she ever be enough?

Diane E. Samson is the author of Gems of Fire, Valley of Bones and Mountain of Flame. She was lucky enough to grow up on acreage just north of Kansas City, Missouri, with horses and dogs in the backyard. When she wasn’t dreaming of Narnia, she was outside riding her horse, training her dog or spending time swimming at the lake. Her love of words led her to earn a degree in magazine journalism from the University of Missouri-Columbia. She subsequently worked as a reporter, editor and in public relations. After moving around the country, she has returned to the Kansas City area where she lives with her husband, children and dog. She will never be without a golden retriever.