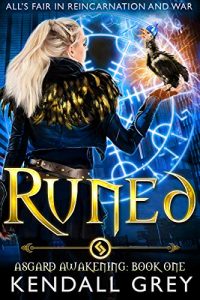 All's fair in love and war … And this is war

Family is just the worst. We've all got that one cousin who's a raging turdhammer. My family thinks it's me: Loki, God of Mischief Extraordinaire. But it's not. It's not even Thor, hammer references aside. It's Odin, the AllDick. Listen, I'm not mad that I woke up in a woman's body after the apocalypse. These things happen. The problem is, Odin stole my runes. You know, the ones that keep me smart, charming, and oh yeah, immortal.

With the AllDick cockblocking my every move, a frenemy chicken interfering in my biz, and the strange, delicious feelings this new body has for the knight-in-modern armor who keeps coming to my rescue, I'll need every weapon in my war chest (which is bodaciously big–gods, how do you ladies sleep on these things?) if I'm going to survive.

Although, I've never been one for the bare minimum. Why only survive when I can thrive? If Odin thought Ragnarok was bad, he's in for the ride of his afterlife when he gets a load of the new me.