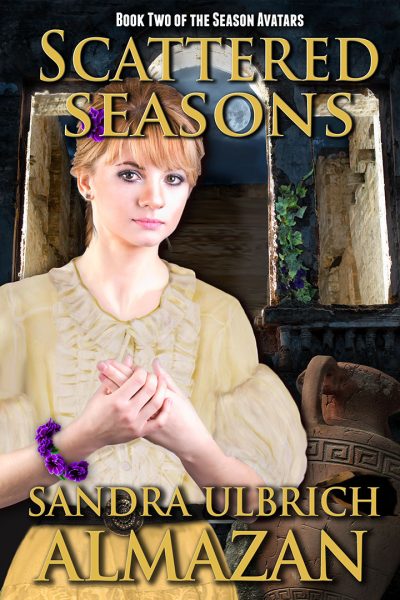 Permafree! Lady Gwendolyn lo Havil is an Ava Spring, born to heal others and lead the Season Avatars of her generation. Season Avatars with divine magic must work in groups of four to save the country of Challen from Chaos Season, times when all of the seasons appear at once. When the current Ava Spring dies in a riding accident, Gwen must find the other three Season Avatars she will link with. But two of them are missing, and with Gwen's own magic crippled by a cursed pottery shard, she will have to use all of her skills to find the Avatars scattered across the country of Challen. During her journey, she meets a stranger who claims to know the shard's origin. Is he truly an ally of the Season Avatars, or is he trying to stop them from uniting?

Second-world gaslamp fantasy with a unique magic system and a team of strong women.

Sandra Ulbrich Almazan started reading at the age of three and only stops when absolutely required to. Her science fiction novella Move Over Ms. L. (an early version of Lyon’s Legacy) earned an Honorable Mention in the 2001 UPC Science Fiction Awards, and her short stories have appeared in several anthologies: Firestorm of Dragons; MCSI: Magical Crime Scene Investigation; Hidden Histories; and Glass and Gardens: Solarpunk Winters (available January 2020). Other works include the science fiction Catalyst Chronicles series, the fantasy Season Avatars series, and SF Women A-Z: A Reader’s Guide. She is a founding member of Broad Universe, which promotes science fiction, fantasy, and horror written by women. Her undergraduate degree is in molecular biology/English, and she has a Master of Technical and Scientific Communication degree. She currently is a QA Representative for an enzyme company; she’s also been a technical writer and a part-time copyeditor for a local newspaper. Some of her other accomplishments are losing on Jeopardy! and taking a stuffed orca to three continents. She lives in the Chicago area with her husband, Eugene; and son, Alex. In her rare moments of free time, she enjoys crocheting, listening to classic rock (particularly the Beatles), trooping with the Midwest Garrison of the 501st Legion, and watching improv comedy.