You are here: Home / Classics / The Tempest (Dover Thrift Editions) by William Shakespeare 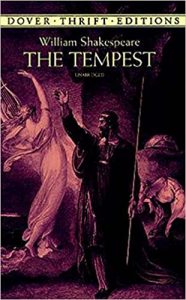 This bewitching play, Shakespeare’s final work, articulates a wealth of the playwright’s mature reflections on life and contains some of his most familiar and oft-quoted lines. The story concerns Miranda, a lovely young maiden, and Prospero, her philosophical old magician father, who dwell on an enchanted island, alone except for their servants — Ariel, an invisible sprite, and Caliban, a monstrous witch’s son.
Into their idyllic but isolated lives comes a shipwrecked party that includes the enemies who usurped Prospero’s dukedom years before, and set him and his daughter adrift on the ocean. Also among the castaways is a handsome prince, the first young man Miranda has ever seen. Comedy, romance, and reconciliation ensue, in a masterly drama that begins with a storm at sea and concludes in joyous harmony.
Students, poetry lovers, and drama enthusiasts will treasure this convenient, modestly priced edition of one of Shakespeare’s greatest plays and one of literature’s finest comedies.